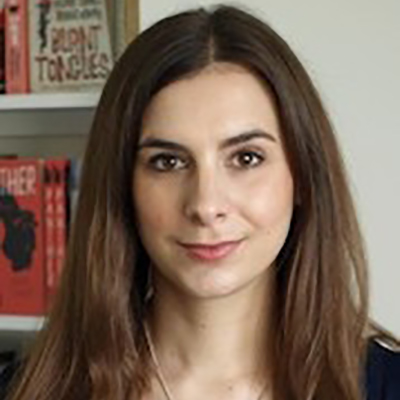 Ella Diamond Kahn is the co-founder and director of Diamond Kahn & Woods Literary Agency, launched with Bryony Woods in 2012. She loves the creative side of collaborating with authors, pitching exciting projects and handling negotiations. Ella represents commercial and upmarket fiction in a range of genres, namely historical, contemporary, uplifting women’s fiction, crime/thriller, and speculative fiction, as well as some non-fiction. She also represents a wide range of children’s fiction for the 9-12 and YA age groups. She is passionate about finding and championing new voices, including those traditionally under-represented in publishing. Her bestselling and award-winning clients include Laura Jane Williams, Chris Lloyd, Jayne Cowie, Sharon Gosling, David Owen, and Dan Smith.

She has an MA in Publishing from University College London and a BA in Anglo-Saxon, Norse and Celtic from the University of Cambridge. She was Chair of the Society of Young Publishers in 2011, and has also volunteered as the SYP’s Events Officer and Treasurer; as an SYP alumna she has offered mentoring to young people in the industry. She became a Freeman of the Stationers’ Company in 2012, progressing to become a Liveryman in 2021 and was Chair of the Young Stationers’ Committee from 2018-2021. She now sits on the Stationers’ Company’s Educational and Academic Advisory Award Committee and their Diversity Working Group. Ella is also currently Treasurer on the Association of Authors’ Agents committee, as well as the AAA’s Equality, Diversity & Inclusion working group, Ella was included in The Bookseller’s list of Rising Stars in 2013, and was a winner of the London Book Fair Trailblazer Awards 2016 and the Young Stationers’ Prize 2016. Since 2016 she has regularly worked with organisations such as London’s Writer Development Agency Spread the Word, to support the development of diverse talent, as well as regularly giving talks on careers in publishing and how to get published at universities, schools and literary festivals. @elladkahn